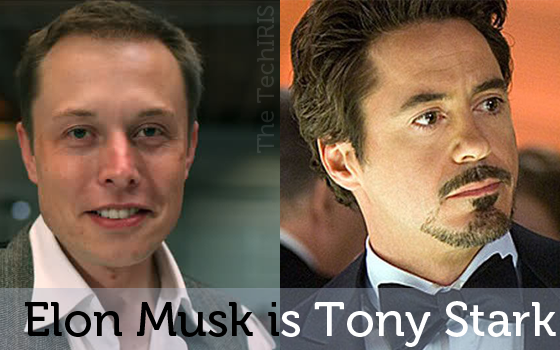 Elon Musk founded PayPal. And Tesla Motors. And SpaceX. And a bunch of other stuff.

He dropped out after 2 days to start a company called Zip2, which he sold to AltaVista for ~ 341 million $ in cash and stock, in 1999. He got $22 million off the deal. At this point, anybody would stop and start swimming in cash. But his biggest three ventures are yet to come.

He then founded X.com, which after a merger became PayPal.com, the world’s first online payment system. PayPal was sold to E-Bay for 1.5 billion $ in 2002. He made 170 million $ from this. PayPal’s co-founder decided to fund other startups in the silicon valley. But Elon Musk? He had to be inventing.

What would you do if you had sold one of the world’s largest Internet companies and made a millions of dollars. Or, what would Iron Man do? Well, he would start a new company that makes rockets. Which is exactly what he did. And being the hard code entrepreneur that he is he bet all of his money on his ideas. Because they were worth pursuing. SpaceX, the company he founded in 2002, got a contract from NASA 6 years later for 1.6 billion $. This is why he thinks space technology is important –

An asteroid or a super volcano could destroy us, and we face risks the dinosaurs never saw: An engineered virus, inadvertent creation of a micro black hole, catastrophic global warming or some as-yet-unknown technology could spell the end of us. Humankind evolved over millions of years, but in the last sixty years atomic weaponry created the potential to extinguish ourselves. Sooner or later, we must expand life beyond this green and blue ball—or go extinct.

He aims to bring down the cost of space flights by a factor of 100. And then retire on Mars.

SpaceX recently launched Dragon, which is the first private spaceflight to go to International Space Station.

He also founded Tesla Motors, where he is the head of product design. Tesla is an electric car company, which recently announced that their car Model S will be available soon.

And then he founded SolarCity, which is the largest provider of solar-powered systems in the US.

He founded TEsla and Solar City to help save the environment. Tesla is a publicly traded company and he plans to take SpaceX ans SolarCity public, soon. He is currently worth ~ 2 billion $.

And if this is not enough to prove that he is the real life Tony Stark, then there is more proof that he is. The proof being that the Tony Stark most people know, the movie character in the Iron Man and Avengers, played by Robert Downey Jr., is based on Elon Musk himself.

The director Jon Favreau and Rober Downey Jr. were developing the character, when RDJ suggested that they meet Elon Musk, as he was the closest to what came to the comic book millionaire-inventor. Favreau said –

Elon Musk makes no sense — and that’s the reason I know him. When I was trying to bring the character of genius billionaire Tony Stark to the big screen in Iron Man, I had no idea how to make him seem real. Robert Downey Jr. said, ‘We need to sit down with Elon Musk.

After meeting him, RDJ and Favreau decided to borrow some of Elon Musk’ characteristics in to the portrayal of Tony Stark on screen.

This basically proves that Elon Musk is, in fact, the Tony Stark of real life. If only he had a suit, he could be Iron Man too!

Tony refers to the Merlin engines that SpaceX actually made, saying they are fantastic. That Elon goes on to say that he has an idea for an electric jet engine, and guess what? He actually does.

Tech news and analysis with India at the center.